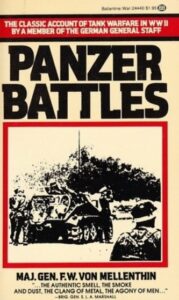 first encountered the German word Schwerpunkt in Major General F. W. von Mellenthin’s Panzer Battles many years ago. The word has a number of definitions but, for our purposes, we’ll use, “the point of maximum effort;” or the point where we should hit the enemy’s lines with all our strength. For von Mellenthin it was the point where his panzers would smash through the Allied lines in the 1940 Western Front blitzkrieg.

Many years later, when I was working on my doctoral research on tactical AI, I realized that calculating the Schwerpunkt was crucial for any offensive algorithm (it’s also a good thing to know your weak points when planning a defense). On every battlefield there is at least one Schwerpunkt but calculating that point first involves numerous algorithms to analyze the terrain, elevation, unit positions, 3D Line of Sight (3DLOS) and range of influence (ROI) of these units.

TIGER1)Tactical Inference GEneratoR was the program created from my doctoral research that performed battlefield analysis. Later, with a DARPA grant, it was expanded into MATE 2)Machine Analysis of Tactical Environments. One problem, that was discussed in my last blog post, was that after analysis MATE would come to the conclusion that some forces should not attack in specific situations (for example, Lee at Gettysburg). However, for General Staff,  we need an AI that will attack when we want it to.

My solution was to create the General Staff AI Editor (this may be rolled into the General Staff Scenario Editor for convenience) which allows the scenario designer to specify objectives for each army’s battle groups. 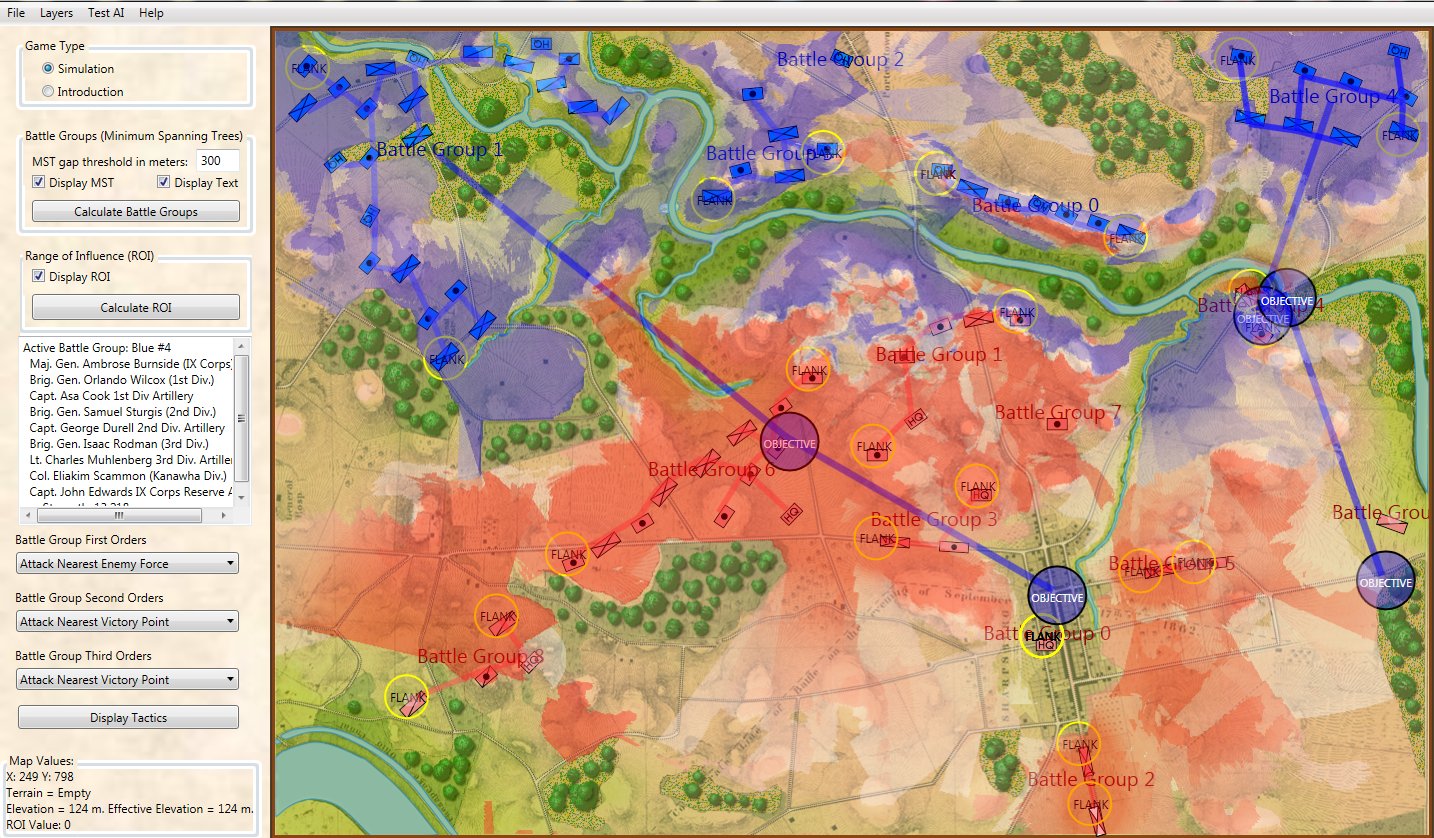 Screen shot of Antietam with battle groups, range of influence and objectives displayed. Blue indicates areas within Blue forces Range of Influence (ROI); meaning that their weapons can fire on these locations. The darker the color the more firepower they can concentrate at that location. The same is displayed for Red forces. Note that areas under both Red and Blue ROI cancel each other out (based on accuracy and firepower). Click to enlarge.

This output is just for debugging and won’t be displayed during the actual game but you can see how MATE made it’s decision to place the Schwerpunkt for Blue Battle Group #1. MATE starts by making a series of statements. These are  similar to predicates used in predicate logic but every statement is known to be true. MATE then constructs hypothetical syllogisms by combining these statements. In the series, below, MATE identifies the opposing force that must be dealt with to achieve its assigned objective, does strength analysis of the two opposing forces, determines if the defender has anchored or unanchored flanks, calculates the slope of the attack, etc., and then calculates the Schwerpunkt after analyzing the enemy’s flank positions, supporting forces and if the attacker has an unrestricted avenue of attack. 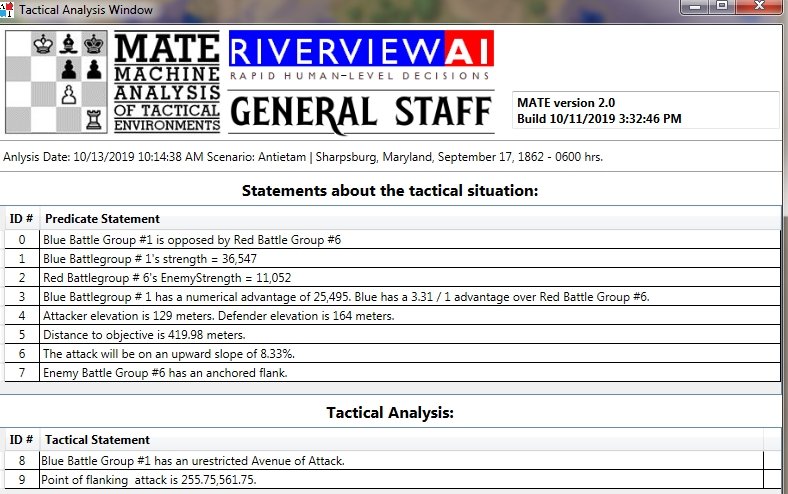 Screen shot of the output from the General Staff AI Editor showing the analysis for Blue Battle Group #1 at Antietam. The top section, “Statements about the tactical situation,” are the results of MATE algorithms that analyze unit positions, strengths, 3D Line of Sight, etc. The bottom section, “Tactical Analysis,” are conclusions drawn from the above statements. Click to enlarge.

The Schwerpunkt for Blue Battle Group #1 is displayed on the map as a blue square. 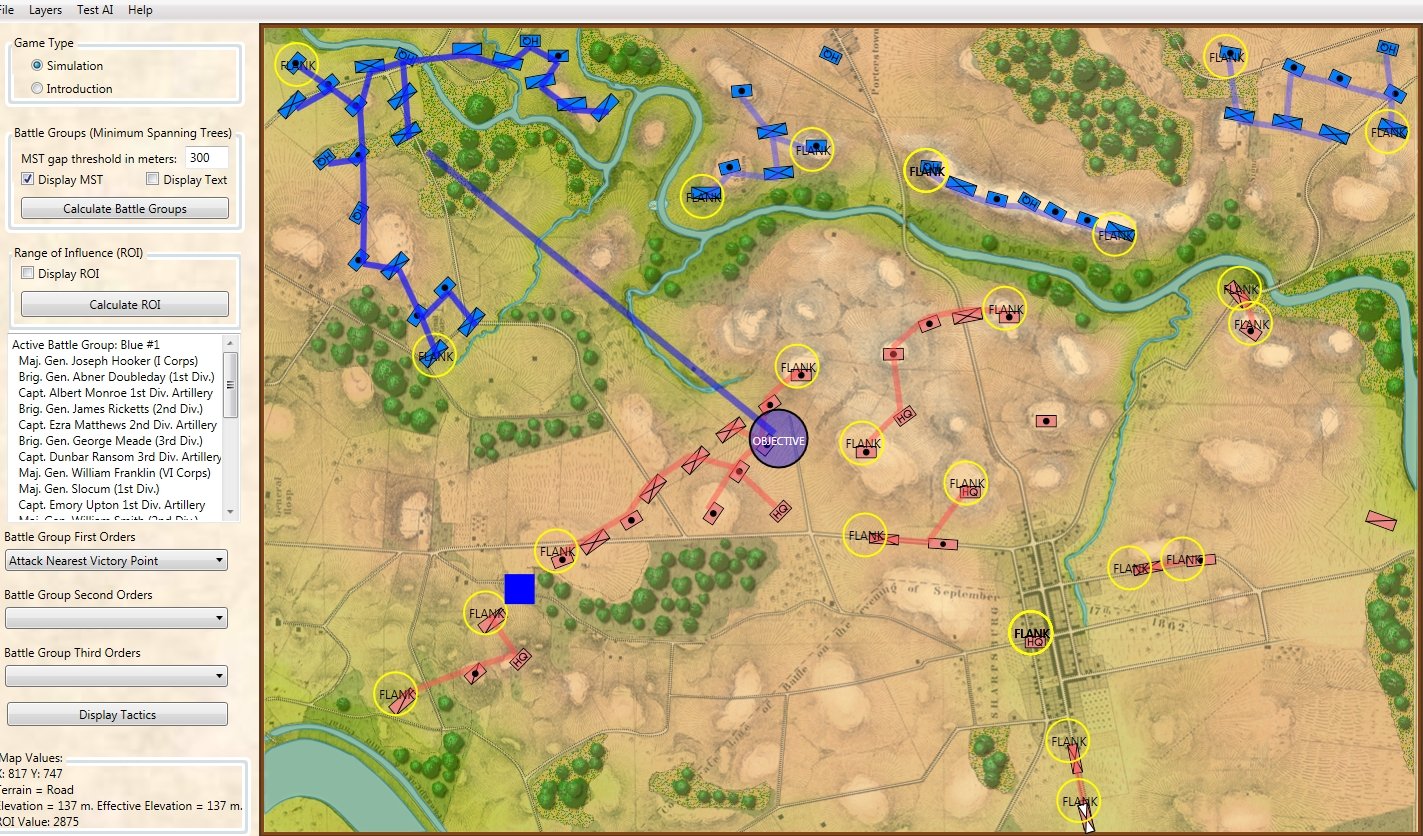 I have written before 3)https://www.general-staff.com/antietam-ai/ about the American Civil War battle of Antietam and I frequently use it as a ‘baseline’ for my AI work. This is because I am very familiar with the battlefield having walked it numerous times, as well as having studied it in depth. So, I know the area that MATE has indicated where Blue Battle Group #1 (Union I and XII corps) should concentrate their attack: west of the West Woods at J. R. Jones’ Confederate Division’s exposed left flank. 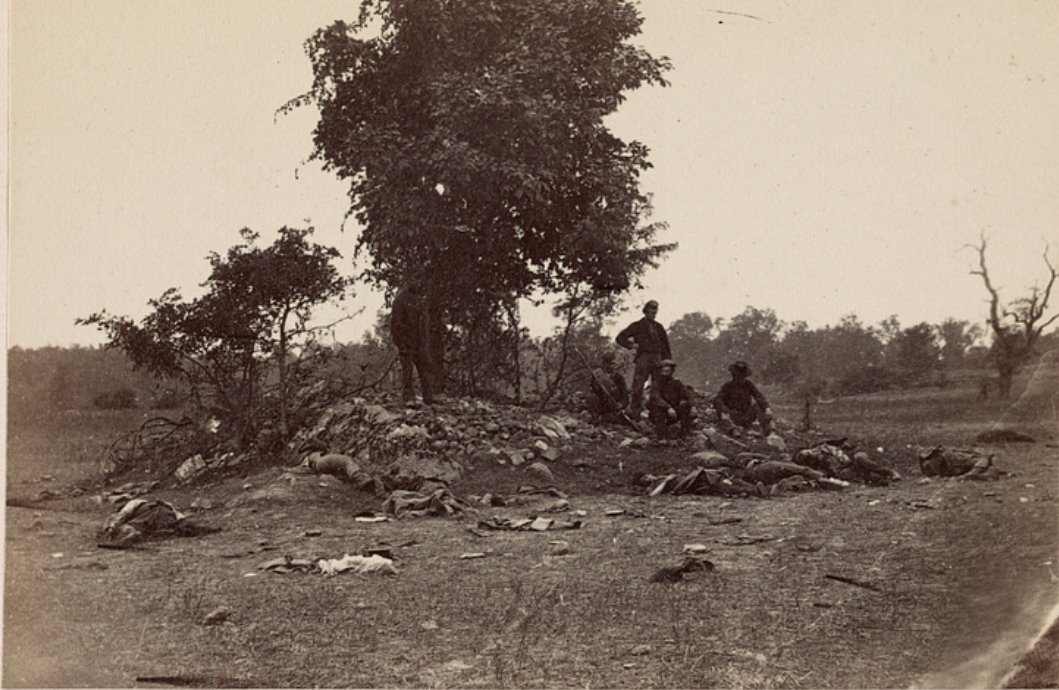 The original caption, “Photograph shows four Union soldiers looking at dead Confederate soldiers on Miller Farm, looking toward the west woods on September 19, 1862.” From the US Library of Congress. Click to enlarge.

Many years ago I had an accountant who would apply what he called, ‘the Reasonable Test’, to Profit & Loss statements. He would look at the P&L statement and ask out loud, “does this look reasonable?” Is this a reasonable number for income? Is this a reasonable number of expenses? So, I ask, “is this a reasonable place for the Union I Corps to attack at Antietam?” And, I have to conclude, yes, it is. I can’t mathematically prove that this is the best place to attack; but I think it’s pretty good. In general, MATE will always attempt to outflank enemy positions and, I think, this is a very solid approach to offensive tactics. Indeed, I’m reminded of Wellington’s comments about Napoleon’s tactics at Waterloo, “Never did I see such a pounding match. Both were what the boxers call gluttons. Napoleon did not manoeuvre at all. He just moved forward in the old style, in columns, and was driven off in the old style.” 4)“Wellington: The Years of the Sword,” p, 488 Longford, Elizabeth For MATE, pounding is a last resort. This is the case at Burnside’s Bridge: 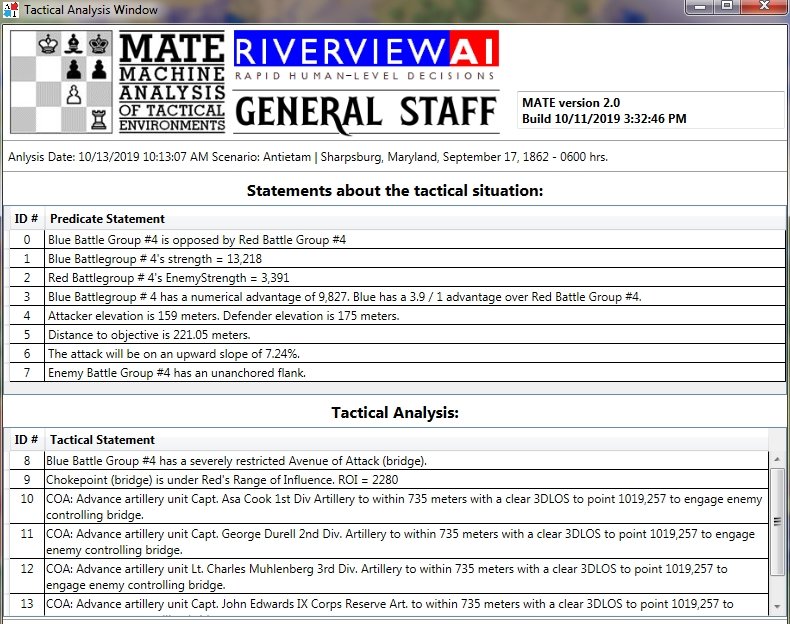 MATE analysis for Blue Battle Group #4 (Union IX Corps) at Antietam. Note that MATE recognizes the choke point (Burnside’s Bridge) and orders up an artillery barrage before the assault. Click to enlarge.

In the Tactical Analysis section (above) look at statement #8: “Blue Battle Group #4 has a severely restricted Avenue of Attack (Bridge).” MATE recognizes that there is no way to maneuver around to the objective (Snavely’s Ford is not on this battle map so there really isn’t any other option except over the bridge). Frontal Assault is MATE’s maneuver of last resort. Consequently, MATE first orders up the artillery to positions within distance (> 50% accuracy as set in the General Staff Army Editor for these units) and with a clear Line of Sight (3DLOS) of the target. MATE will order the artillery to bombard enemy forces that control the bridge for an hour before ordering an infantry assault). 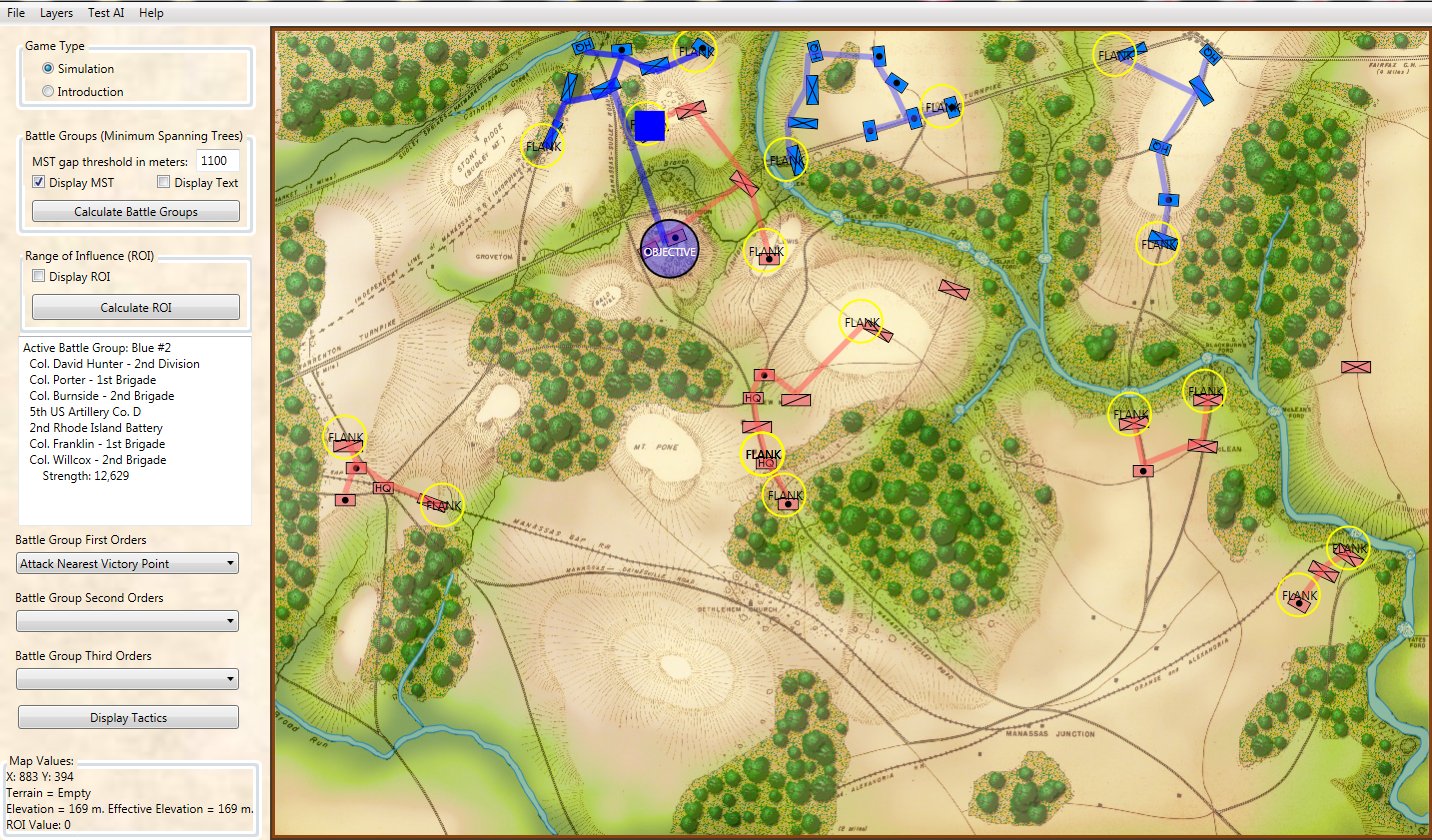 Screen shot from the General Staff AI Editor showing objective set for Union forces at the battle of First Bull Run. The Union Schwerpunkt is the blue square to the west of the Confederate left flank. Click to enlarge.

Here Blue Battle Group #2 (Heeintzelman’s and Hunter’s Union divisions) are assigned the objective of capturing the Henry House Hill (historically accurate). MATE set’s their Schwerpunkt to the west of the Confederate left flank. This is very close to Union commander McDowell’s original strategy. Again, MATE will attempt to outflank strong positions rather than attack them directly. MATE is not a pounder.

MATE’s analysis for the Union’s right flank: they have an unrestricted Avenue of Attack and Red’s left flank is unanchored. Click to enlarge.

MATE recognizes that the Confederate’s left flank is unanchored and is a perfect target for an envelopment maneuver and places the Schwerpunkt at the end of Red’s line appropriately.

I still have work to do on MATE’s ability to construct defensive lines and that will be the next thing to add to the AI. But, as you can see, great progress has been made. I believe that the MATE tactical AI is unique and I know that there is nothing similar even among the wargames used by US and NATO allies. As always, please feel free to contact me directly if you have any questions or comments.