Boxes of the General Staff coffee mugs with two different Kriegsspiel engravings have just arrived! We still need to run out and get bubble wrap and packaging materials but we should begin shipping these beauties out early next week (we just got hit with another blizzard). 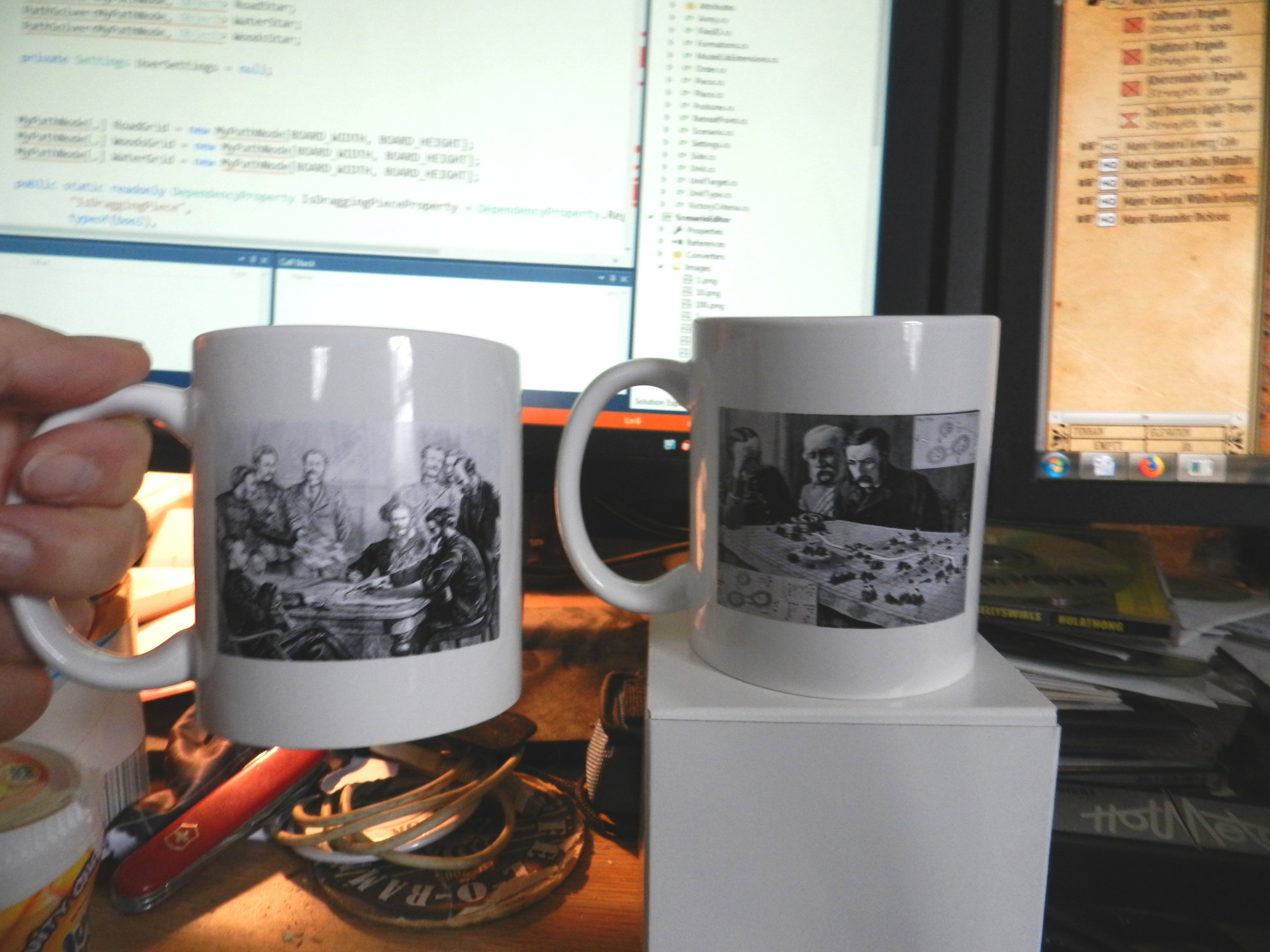 A big thank-you to Kelly who dealt with the suppliers, shipping and everything!

How can anybody ever think of playing a wargame without one of these beauties to hold your beverage of choice?

The Kickstarter campaign is over and we’re still in shock. Wow! I can’t thank you, the backers, enough! Literally, I couldn’t have done it without you. General Staff was 325% funded which is a wonderful vote of confidence. Again, thank you very much.

So, what’s going to happen next?

We’re going to write a one-click installation package for the Army Editor and the Scenario Editor.

We’re going to make a major change in the Map Editor so it will run on lower resolution (usually older laptops) monitors. And then write an installation package for it, too.

We are going to have to make some changes to the various data files, too. Once this is done we’ll send out an email with the URL to start downloading and installing these three utility programs.

I have to order a whole lot of coffee mugs printed with the logo and a couple of great 19th century Kriegsspiel engravings.

And then we have to mail out a whole lot of coffee mugs.

I anticipate that those who are interested can start beta testing the utility programs (Army Editor, Map Editor and Scenario Editor) in February. With any luck beta testing the actual General Staff game will begin in March.

Again, thank you so very much,

Thank you so much for your support of our Kickstarter campaign. We just went over $10,000 and that means that we have reached 200% of our funding goal! We also hit our second Stretch Goal; the AI Adjutant:

Click on “Ask the Adjutant” to get the AI’s take on your situation. Links to stable web resources. “Your line is at risk of envelopment. This did not turn out well for Scipio Africanus at Cannae.” Optional graphic display of calculations, geometry, hierarchical classification system, etc. This was suggested by Rob Hansen, an old friend from grad school – and I think this is brilliant.

Do you have a suggestion for our next Stretch Funding goal at $12,500? Please write to me if you have comments or suggestions.

There are still 20 days left in the Kickstarter campaign.

We are extremely pleased to announce that we reached our Kickstarter funding goal in just a little over 24 hours! Now it is on tour first stretch goal: implemented PBEM (Play By EMail). Thank you all so very much! We literally couldn’t have done this without you!

After two and a half years this is the day we’ve been waiting for. We have launched on Kickstarter! This is the link: https://www.kickstarter.com/projects/1366362068/general-staff-game-of-military-tactics-and-wargami.