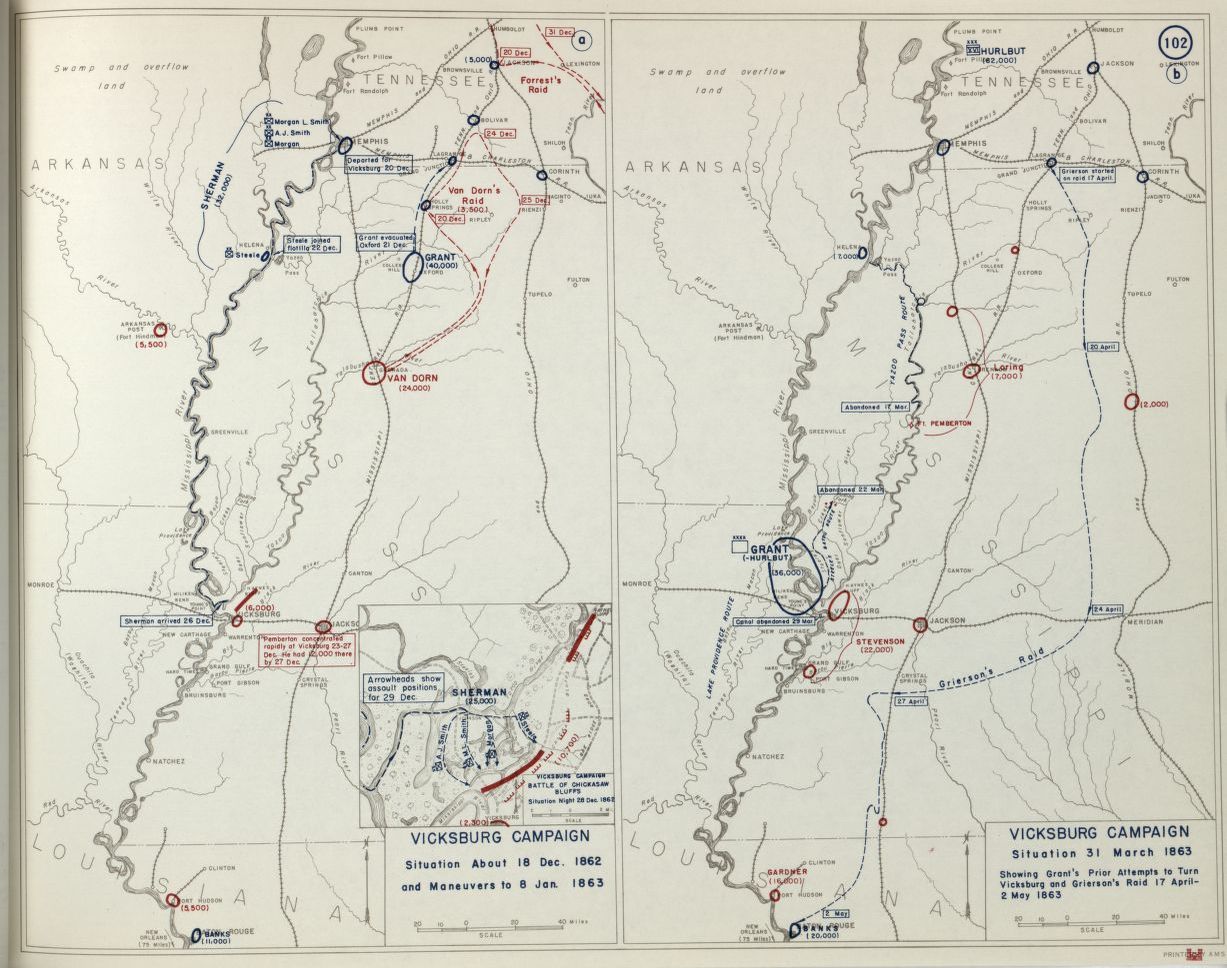 A few of Grant’s unsuccessful attempts to take Vicksburg. Map from West Point Atlas of American Wars. Library of Congress. Click to enlarge.

Grant took Vicksburg on his sixth attempt. He first tried a direct movement, east of the Mississippi, against the city but was forced to turn back after Confederate General Van Dorn’s raid destroyed his supply base. Sherman next attempted a direct assault and failed at Champion’s Bluff. Grant then tried to cut Vicksburg off from the Mississippi by digging a great canal across the neck of a giant oxbow. Unusually low water levels in the river that year caused another failure. Grant also tried more canal digging and river clearing at Lake Providence and the Yazoo Pass without luck.

Col. Theodore Lyman, a staff officer of the Army of the Potomac, wrote of Grant, “He habitually wears an expression as if he had determined to drive his head through a brick wall, and was about to do it. I have much confidence in him.”

Grant finally succeeded with his brilliant amphibious landing south of Vicksburg followed by a series of ‘must win’ battles that concluded with besieging the city on May 22, 1863. Confederate General Pemberton surrendered Vicksburg on July 4, 1863.

The General Staff: Black Powder Wargaming System is comprised of four separate programs: the Army Editor, Map Editor, Scenario Editor and the actual Game Engine, itself. The first three have been done for some time (it’s what I use to produce scenarios for testing the AI). They were written in C# using Microsoft’s Windows Presentation Foundation (WPF) which is often used for creating desktop business applications. This decision made sense because the Army, Map and Scenario Editors function not unlike a suite of business applications that create and share data with a common look and feel. However, while WPF was a good development decision for the Editor programs it turned out not to be a great tool for creating the Game Engine. 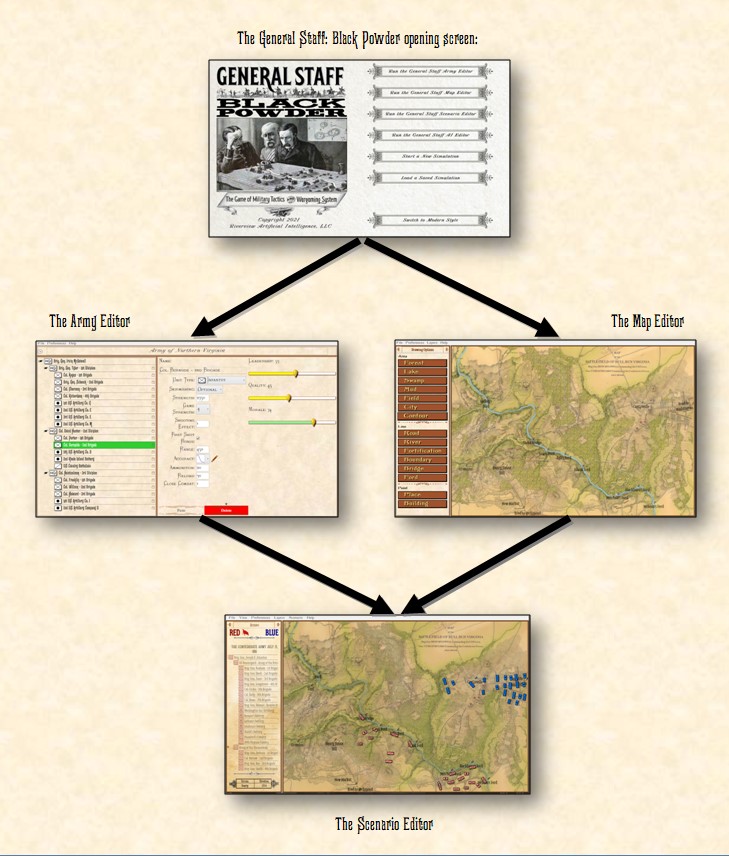 A flow chart of the General Staff: Black Powder Wargaming System. Files created in the Army Editor and the Map Editor are combined in the Scenario Editor to create a scenario or simulation. Click to enlarge.

What the Game Engine does is it takes data created in the three Editor programs, displays them in a visually exciting way, enables the user to make input (orders), and simulates those orders (as well as the AI’s orders) and the resulting combat to the highest degree of accuracy possible. That sounds like a lot, but it really isn’t. And the heavy lifting that the Game Engine is being asked to do is all visual: making everything look good on the screen.

Recently, I’ve been looking at Grand Tactician: Civil War which is an immersive voyage into 19th century American typography, cartography, tactics and grand strategy. I eagerly look forward to having the time to do more than gaze upon it in amazement 1)Full disclosure, the developers were kind enough to give me a review copy of Grand Tactician and, damn, it looks fantastic.. I reached out to Ilja on their development team and he convinced me that we should complete the General Staff Game Engine in Unity (which is what they used for Grand Tactician). What they accomplished visually with Grand Tactician was precisely the look and feel that I wanted for General Staff 2)I’m talking about the typography and the UI, not thousands of tiny 3D soldiers on the battlefield; which look really great, but, General Staff is not that kind of a wargame..

Consequently, we are officially announcing that we are abandoning writing the General Staff: Black Powder Game Engine in WPF and, instead, will be creating it using the Unity engine. We believe that this will produce a far superior visual experience 3)Please note: we will not being using Unity to create a 3D simulation with tiny soldiers. I like playing those kind of games, but that’s not what General Staff is..

Because Unity is designed to facilitate the creation of computer games, this move will greatly accelerate the completion of the General Staff Game Engine and will allow us to ship General Staff: Black Powder this year.

I am certainly not U. S. Grant, though I like to think I have some of that bulldog determination. Like Grant before Vicksburg, I’ve had to acknowledge that our first attempt will not succeed and we’re moving on to another plan. I am sorry for the delay in the release of General Staff and am confident that, with Unity, we will soon be reporting some good news.

I am also very excited to announce that my good friend, Damien, will be joining the team to specifically work in Unity completing the General Staff Game Engine. Damien lives in Ireland and has been a devout wargamer since playing Arnhem on the ZX Spectrum. When not enjoying a Guinness or a Jamesons, he’ll be playing tabletop or computer games, whether that means pushing cardboard counters across hex boards, drawing LOS between badly painted miniatures on the tabletop, or day-long sessions in front of a computer – where he particularly enjoys playing against a challenging, non-cheating AI. Damien is a 28 year veteran of the IT industry, having worked on everything from telecoms, healthcare and financial systems, across Mainframes, Linux, Unix and Windows, and co-inventor of two messaging system patents. He has a particular passion for language processing and domain specific languages, originating from his interest in the elegance of recursive descent compiler construction.