The results of our first survey about what kind of wargame you would like to see are now available and there were plenty of surprises. The first question that we asked you was: did you prefer a 2D or 3D game. I had been previously assured by the, “largest digital publisher of wargames in the world,” that only 3D games would sell. But, that doesn’t seen to be upheld by these results: 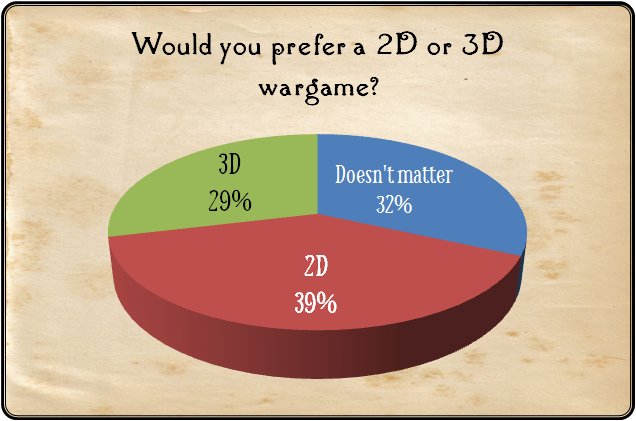 Surprisingly, 71% of respondents said that they would either be happy with a 2D wargame or that it didn’t matter to them. Those are pretty overwhelming numbers. It should be no surprise that it takes a great deal more time and money to create a 3D wargame than a 2D wargame so these results are quite eye opening and also reassuring. While this flies in the face of what we were told by the ‘largest publisher of digital wargames in the world’ it nonetheless, comes directly from the consumers themselves.

The next question was, “How important is the ability to create new scenarios?” Two of the last three games that I wrote (UMS and UMS2) provided the ability for users to create new scenarios. Creating a suite of scenario editing utilities is not trivial. Frankly, as a game designer, you normally just cobble some system together that will allow you to create scenarios for your game. Often these include XAML files and using PhotoShop or some other paint program. Frequently this system is buggy or you have to do something in a weird order for it work right. But when you create an editing suite for the public it has not only be bug-free but it has to have an intuitive and easy to use interface. Based on the your responses, below, it looks like I’ll be creating an editing suite for you to create your own scenarios. 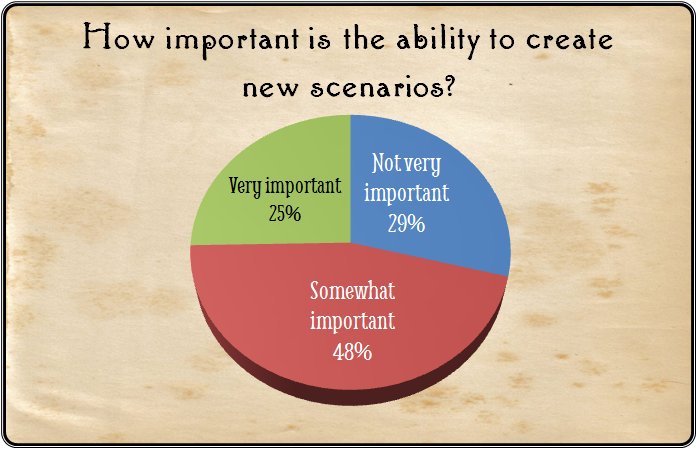 How important is the ability to create new scenarios? 25% said “Very important,” 48% said “Somewhat important” and 29% said, “Not very important.”

The next survey question asked how many scenarios you would like to see ship with the game. The overwhelming favorite was ’20’ and so we’ll make sure that at least 20 scenarios are included. 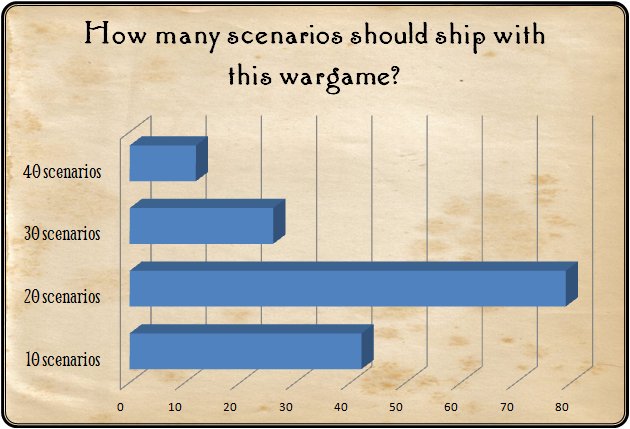 The overwhelming favorite was 20 scenarios.

Since 1986 every game that I’ve designed and written has been published by a ‘big’ computer game publisher. Game publishers traditionally give the game developer an advance against royalties and are responsible for distribution and promotion of the product. In return, they take between 50% and 85% of the gross receipts. Yes, that is correct.

The alternative to going the publisher route is to use Kickstarter to self fund and I am very gratified to see that the overwhelming majority of survey respondents said that they would, indeed, support this wargame via Kickstarter: 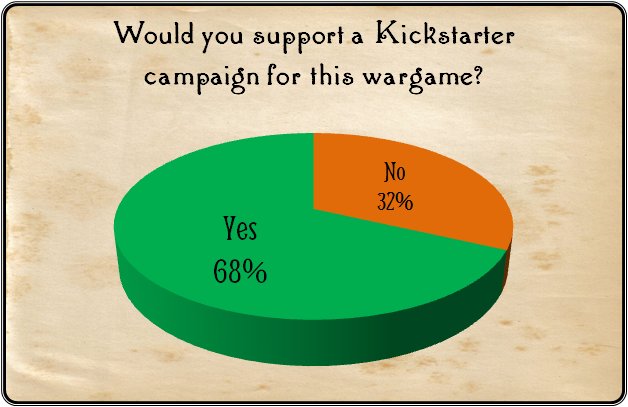 Respondents to the survey overwhelmingly said they would support a Kickstarter campaign to fund this wargame.

The final question in the survey was the all important, “How much would you pay for this wargame?” It looks like a list price of $50 seems not unreasonable. Early backers in Kickstarter always get a price break for their support. I’m thinking $40 on Kickstarter, $50 after.

$50 was the most popular price for this wargame.

Many thanks to all who participated in this survey (N = 168). The results were surprising and very helpful. Unfortunately, I realized that there are more questions that need to be asked about gameplay and distribution, so expect another survey shortly.