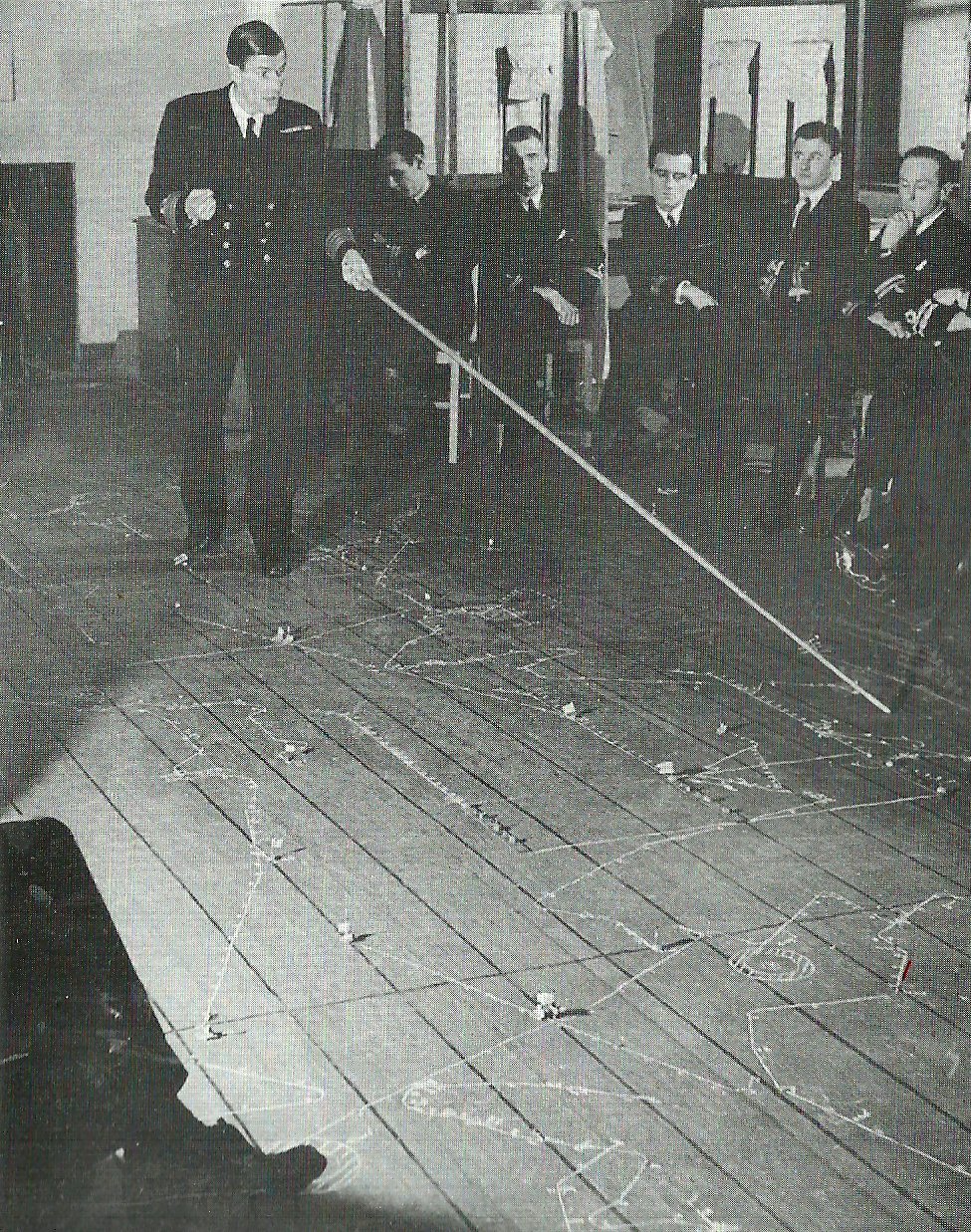 Commander Roberts going over the lessons learned from “The Game.” Photo from, “A Game of Birds and Wolves,” by Simon Parkin.

Simon Parkin’s A Game of Birds and Wolves: The Ingenious Young Women Whose Secret Board Game Helped Win World War II, tells the fascinating story of a wargame created during the height of the U-Boat Atlantic campaign to be used as a testbed for discovering new anti-submarine tactics. In early 1941, when German wolf packs were destroying Allied shipping at a devastating rate, British Naval Commander Gilbert Roberts was taken out of retirement and personally ordered by Winston Churchill to, “Find out what is happening and sink the U-boats.”

The WATU project – known simply as, “The Game,” – is not the first example of a wargame used as a testbed to discover and improve combat maneuvers. Indeed, Scotsman John Clerk, wrote, An Essay on Naval Tactics: Systematical and Historical in 1779 after using, “…a small number of models of ships which, when disposed in proper arrangement, gave most correct representations of battle fleets… and being easily moved and put into any relative position required, and thus permanently seen and well considered, every possible idea of a naval system could be discussed without the possibility of any dispute.” Using these models Clerk proposed the tactic of “cutting the line,” that Nelson employed at Trafalgar1)https://en.wikipedia.org/wiki/John_Clerk_of_Eldin. Nelson would quote from Clerk’s essay in his famous Trafalgar Memorandum.

When Roberts reported to Sir Percy Noble, commander of Western Approaches he explained that he intended to, “develop a game that would enable the British to understand why the U-boats were proving so successful in sea battles and facilitate the development of counter-tactics… The game would become the basis for a school, where those fighting at sea could be taught the tactics. With a few adjustments.. [the] wargame could be used for either analysis or training.”2)A Game of Birds and Wolves, p. 143 Not surprisingly, Roberts was met with skepticism and not a little bit of derision. As one who is constantly pitching the importance of wargames to the U. S. military I understand the uphill fight that Roberts was facing. British destroyer commanders definitely did not want to go to Liverpool to, “play a game.” But, since the orders had come directly from Churchill, Noble had little choice but to give Roberts the top floor of the Western Approaches HQ for his ‘game’. Roberts made a tactical mistake by referring to WATU’s ‘product’ (in modern bureaucratic parlance) as a ‘game’. I learned this early on in my career: never say the word ‘game’ if it can be avoided. Call what you’re working on a ‘simulation’. Chess is a game. Risk is a game. But I write simulations; and clearly what Roberts was working on was a simulation, too. (That said, the phrase, “game it out,” has now passed into the common idiom and is synonymous with ‘simulation’.) 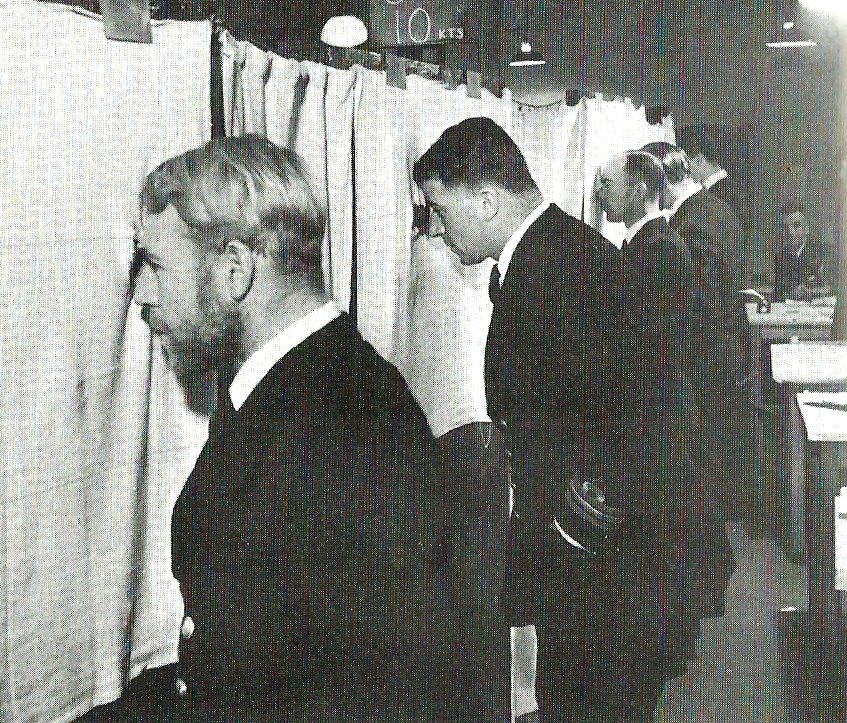 WATU simulated Fog of War by requiring the users to view the board through peep holes cut in canvas drapes. Submarine tracks (see above) were drawn in green chalk which, apparently, was not visible from the other side of the canvas sheets. The photo shows British destroyer commanders playing, “The Game,” and learning from the simulation. Photo from, “A Game of Birds and Wolves.”

In order to simulate Fog of War Roberts invented a system in which the destroyer commanders would view the board from behind a canvas sheet; their view of the battle restricted by peep holes cut in the canvas. Furthermore, submarine tracks were drawn with green chalk on the floor (see above photo) which, somehow, became invisible when viewed from the other side of the canvas. Consequently, the destroyer commanders had only a restricted view of the battle around them and were completely in the dark as to the simulated U-boats positions.

When Roberts began his work nobody in the British Admiralty knew U-boat tactics. Indeed, the German U-boat commanders were creating their tactics on the fly often ignoring the Kriegsmarine’s Memorandum for Submarine Commanders to fire torpedoes at no closer than 1,000 meters. U-boat ace, Otto Kretschmer was the first to insist that the most efficient way to attack convoys was to slip inside the destroyer screen, launch torpedoes at a range of about 500 meters, submerge and wait for the convoy to pass over them to make his escape ‘out the back’ of the convoy. Interestingly, this was the same technique that I discovered playing Sierra On Line’s  Aces of the Deep.

One of the first scenarios that Roberts investigated using his new wargame was the battle of Convoy HG 76. This was a multi-day contest involving 32 merchant ships, 24 escorts and 12 U-boats. It was considered a great Allied victory because five U-boats were sank (though the Allies only knew of three at the time) and 30 merchant ships made it home safely. Assisted by WRENs Jean Laidlaw and Janet Okell, they replayed the historical situation hoping to understand Allied commander Captain Frederick John “Johnnie” Walker’s anti-submarine maneuver ‘Buttercup’. The Buttercup maneuver (named after Walker’s pet name for his wife) involved, “on the order Buttercup… all of the escort ships would turn outward from the convoy. They would accelerate to full speed while letting loose star shells. If a U-boat was sighted, Walker would then mount a dogged pursuit, often ordering up to six of the nine ships in his [escort] group to stay with the vessel until it was destroyed.”3)A Game of Birds and Wolves, p. 155

What confused Roberts was that the Allied merchant Annavore was torpedoed while in the center of the convoy. As he and the WRENs replayed the scenario they could not duplicate reality unless the U-boat had, “entered the columns of the convoy from behind. And it must have done so on the surface, where it was able to travel at a faster speed than the ships. By approaching from astern, where the lookouts rarely checked, the U-boat would be able to slip inside the convoy undetected, fire at close range, then submerge in order to get away.”4)The Game off Birds and Wolves. P. 158

Using the scenario of when the escorts actually sank a U-boat using the Buttercup maneuver it was determined that they had succeeded by only accidentally hitting a U-boat that was joining the attack on the convoy and not the actual U-boat who had made the attack that they were pursuing. This makes sense when you realize that the attacking U-boat had submerged immediately after the attack and was waiting for the remaining convoy to pass overhead while the escorts were running far outside the perimeter of the convoy looking for it.

In other words, Walker’s Buttercup maneuver was, in fact, a terrible anti-submarine tactic.

The ‘Raspberry Maneuver’, created from numerous runs of ‘The Game’ was determined to an effective anti-submarine tactic. Here it is drawn by Admiral Usborne. From the book, “A Game of Birds and Wolves.” Click to enlarge.

The first successful anti-submarine tactic to be invented using the Game as a test bed was, “Raspberry,” (so called by Wren Ladlaw as a ‘raspberry‘ to Hitler). As you can see from the above drawing, upon discovery of a U-boat or a torpedo hit, the escorts draw closer to the convoy, not the opposite as in Walker’s Buttercup maneuver. When Roberts and the WRENs ran a scenario for Western Approaches commander Noble and his staff, Noble – who at first was highly skeptical – was so impressed that he immediately sent a message to Churchill, “The first investigations have shown a cardinal error in anti-U-boat tactics. A new, immediate and concerted counter-attack will be signaled to the fleet within twenty-four hours.” 5)The Game of Birds and Wolves, p. 162 By summer of 1942, using these new maneuvers, U-boat losses had quadrupled. Eventually other anti-U-boat maneuvers were also developed by the WATU team and all Atlantic destroyer commanders were ordered to WATU to play, “The Game,” and learn the lessons.

Obviously, there were other improvements in anti-submarine warfare that also contributed to the Allies winning the Battle of the North Atlantic. Nonetheless, it is interesting to read about the proper application of simulations in wartime. I have long been an advocate of simulations to test, “what if” scenarios. Indeed, this has been the main focus of my professional career for thirty plus years. It’s still an uphill battle.